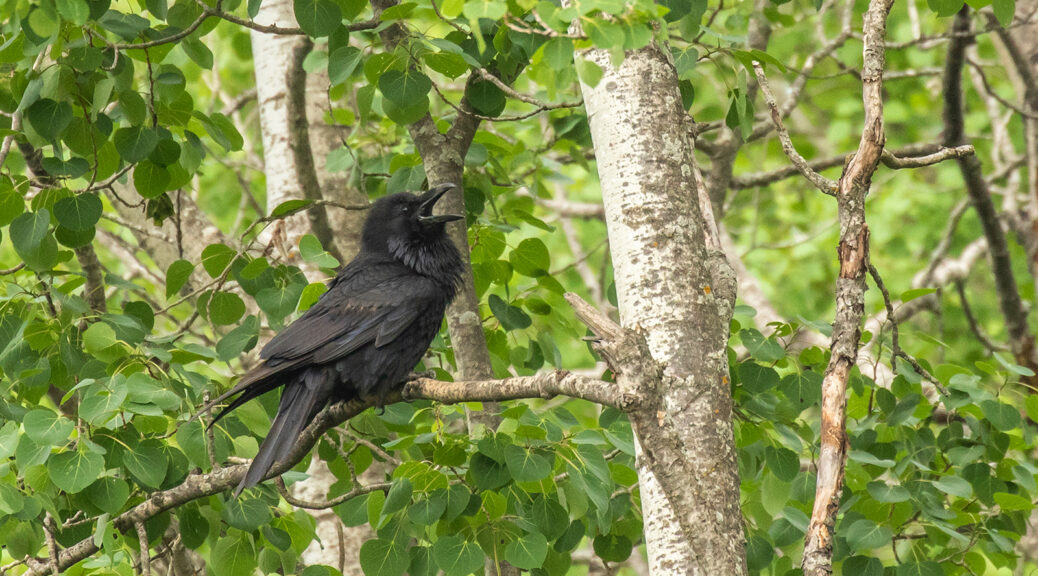 Calling someone a bird brain has been used as an insult for many years.  However, I have never liked this saying.  Being a human fascinated by animal behavior, especially birds, I never understood why it was used in a negative way.  Sure, some bird species aren’t the most intelligent creatures on the planet (looking at you Emu), but there are some incredible behaviors and lifestyles exhibited in many species that brings them to the top of the most intelligent animals list right alongside apes and dolphins.

When birders or ornithologists are asked about bird intelligence, the corvids first come to mind. Corvidae is a family of passerines (perching birds/songbirds) that encompasses crows, ravens, jays, magpies, jackdaws, and more. The corvids are incredibly interesting and complex birds that are the basis of many animal behavior studies and I will focus on examples of their intelligence for this post. However, before we dive into the fascinating world of Corvids, I wanted to throw some other cool examples of bird intelligence at you.

Also, keep in mind that labeling behavior as intelligence in birds is a bit complex. There are some seemingly incredible behaviors that birds exhibit, and while they are pretty impressive, they are innate rather than learned. A bird that then takes an innate or learned behavior and applies it to a novel situation is where intelligence begins to be examined in that species. For example, many bird species know instinctively that sticks are good for best building (depending on the species), but an intelligent species might realize that the stick could be useful in other ways such as a tool to forage for grubs.

(I could write a whole textbook on corvid intelligence, so I selected a few of my favorite examples to ensure this blog doesn’t turn into a book.)

Caching – This behavior is defined as the act of foraging and storing food at cache sites in an individual’s home range for future retrieval. Several bird species other than members of the corvid family display caching behaviors such as chickadees and woodpeckers. However, Crows and Ravens are especially intelligent in this regard. Other species may forget the location of some of their caches, but crows and ravens are much more skilled and methodical in their caching. They not only bury food at specific sites, but they also incorporate an object to the site like a twig or leaf to help them remember where their food cache is. The individual creates a mental image of their cache so they will not forget its location.

Furthermore, individuals will pay attention to others in the area and will try to only cache their food when no one is looking. If another individual spied on their caching site, they will take advantage of the opportunity for an easy snack and dig up other their neighbors caches. They can also exhibit deception by pretending to bury a food item in a fake cache if they are in the presence of others that are spying on them!

Funerals – Many people might have heard the fact tossed around the crows and ravens have funerals for members in their community that have died. Like most wild animal facts that spread around social media, the fact is somewhat true. However, it is not exactly as it seems at surface level. While many people view it as mourning behavior, crows will flock to dead individuals in order to gain intel. It is risky to approach a corpse, however. That is why researchers believe that crows who approach dead individuals are trying to figure out what killed the bird and if the threat is still in the area.

Human facial recognition – Through a fascinating study at the University of Washington, it was found that crows can actually recognize human faces and remember the threat level of the individual. Researchers wore unique masks and then trapped, banded, and released young crows at different sites. Over the next five years, researchers walked down paths near these release sites with either a neutral mask (one that wasn’t worn when the young were banded) or one of the “dangerous” masks that the researchers wore when banding the young crows. At first, around a quarter of the crows scolded and dive-bombed the people wearing the dangerous masks.

This % of individuals recognizing the humans increased, and at the three-year mark, 66% of the area crows were now scolding and dive-bombing the dangerous mask wearing researchers. This is an indicator that crows were communicating the threat of the specific masks to other crows. The passing down of knowledge to conspecifics and future generations is a sign of intelligence of a species and the possibility of culture.

If this blog was interesting to you and you want to learn more about bird intelligence, I highly suggest the book “The Genius of Birds” by Jennifer Ackerman. It is an incredible read chock full of examples of fascinating bird behavior. In addition to the book, below is the link to a great documentary about corvid intelligence.

Information presented in this blog was a combination of my own knowledge in the field of animal behavior as well as the following sources:

This site uses Akismet to reduce spam. Learn how your comment data is processed.

This work is licensed under a Creative Commons Attribution-NonCommercial-ShareAlike 4.0 International License.